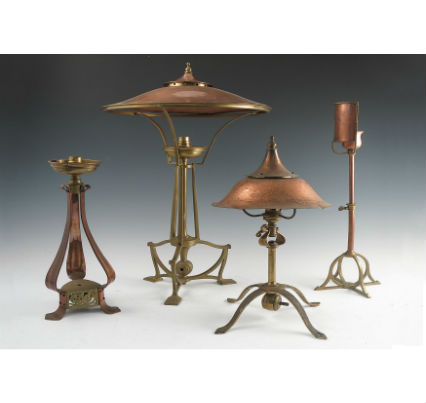 Philip Serrell Auctioneers were fortunate to stumble across some excess unwanted metal lighting from a local estate.  The auctioneers instantly recognised the distinctive features which are indicative of the Birmingham Guild of Handicraft and on closer inspection the well hidden marks were identified.  Specialist buyers and collectors for these highly prized items were bidding in the room and by telephone and prices reflected the increasing buoyancy of the Arts and Crafts market.

The Birmingham Guild of Handicraft was an Arts and Crafts organisation operating in Birmingham, England.  It’s motto was ‘By Hammer and Hand’.

It first began as a loose part of the Birmingham Kyrle Society but it became a more fully formed group in 1890 under the leadership of the silversmith and architect Arthur Stansfield Dixon.  The Guild’s first address was at Kyrle Hall, Sheep Street where the workshop and limited company was under the guidance of Edward Taylor, an important figure in the history of Birmingham School of Art.  The Guild produced furniture and metalware, taking special advantage of the switch to electric lighting and hence the constant need for new light fittings.  Arthur Dixon was the chief designer and head of metalwork workshop.  Other members were Albert Edward Jones and Thomas Birkett.

The Guild also produced fine books under the 'Press of the Birmingham Guild of Handicraft, Limited' and a periodical titled The Quest. The Quest began in November 1894 and aimed to appear three times a year, but was short-lived.  William Morris was a contributor to these publications.

The Guild unfortunately ran into financial difficulties and was taken over several times.  It was still a recognisable business up until 1950 where the names was still shown as “The Birmingham Guild Ltd, Architectural & Decorative Metalworkers”